This is a combined report of two private events that went on earlier this summer. The first one took place up north on the weekend of June 2nd, and the second took place on July 1st. Both games were 2v2, with the first event consisting of soakfest and a single-sided assault game, while the second event consisted entirely of elimination.

NEW! Super-HD SVG Version
Use ctrl-mousewheel to zoom into the HD goodness!

Objects on the map are colored according to actual appearance. Object borders’ thickness are based on object color and the object’s significance. Transparent green represents wooded area that leads to the edge of the playing area.

The games were quite short. Most of the gameplay took place in the backyard of the cottage, and partially to the lower part of the building all the way to the deck. Most of the time playing (not preparing) was spent to the soakfest. Everything was used, from stream machines to CPS’s and even water balloons. The lake made for a great, fast, clean, and reliable refilling source. A faucet was also present in the L-shaped inset of the house (at the lower-right corner of the building) near a tree (marked by the brown circle with green outline shown) Unfortunately, some vintage CPS’s were submerged in the lake to fill from it, which has probably accelerated the process of rusting on the metal parts inside. In any case, lots of good photos were captured during this game.

After that, we went with the assault game. The objective was for the attackers to grab a cup of water sitting on the dock and pour it out to the lake. (Originally, the cup was placed inland but was then moved from a later decision.) Lives were infinite, but since I didn’t want spawning to be too constricted, I made the mistake of making less strict spawning rules. (Specifically, attackers and defenders each had a valid spawn zone, where they could go back into play instantly as long as they were in the spawn zone and out of shooting range of any opponent. The rules were revised after the round ended, and we switched sides. However, we didn’t get to switch back and play again.

Overall, the playing area worked in its ways, albeit a lot of action was constrained into open area shootouts. The dock made for a dynamic, exciting, and slightly more dangerous playing area, and offered no way of dodging or retreat. 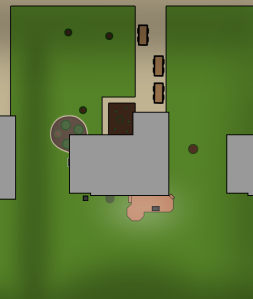 NEW! Super-HD SVG Version
Use ctrl-mousewheel to zoom into the HD goodness!

As with before, objects are colored by appearance. In addition, lightened and darkened areas indicate higher and lower elevation levels, respectively. This playing area had much more dynamic terrain than the previously shown map, which had considerable effects on gameplay. The shown map doesn’t do justice very well to the height dynamics, but give a rough idea of it. Heights varied to the point where large range advantage/disadvantage zones were created. For example, by standing on the deck in the backyard, one can fire streams that reach all the way to the left wall/edge of the house. The circular mulched area (to the upper-left corner of the house) contained some vegetation and made a great ambush spot.

The group for this game was quite different than before. At first, we did sidearms only, which involved two WW Hornets, a Max-D 2000, and two Max-D 3000’s. Later on however, one player of each team carried a CPS and optional sidearms. The CPS’s were too heavy for the other player of each team to use them since they were small kids.

Refilling was very restrictive during the games since the only option was to use a very leaky faucet with no proper nozzle. Eventually, one of the players went inside, got scissors, and cut up a .5L bottle to make a funnel for it, which greatly speeded up the refilling process. I also went inside to get screwdrivers in an attempt to fix a leaky 2500 nozzle selected, but never managed to make it work quite right.

We played many rounds of elimination throughout the day (probably at least 10 rounds), switching sides where one team would start at the left side of the house and the other at the right. I myself did not play very well until later on. A common scenario is where one team would stay at the lower-left corner of the house and the other team would take a high position on the deck, able to easily hit anyone who got too close to it. However, this didn’t happen all the time though, as a lot of action also took place at the front of the house. At one point, I got ambushed from the circular mulched area (upper-left hand corner of the house) after the game started becoming a matter of knowing where people were and making fast moves accordingly more than shooting and dodging in the open. I did manage to get an easy kill or two at the front of the house from using the cars as cover, but that didn’t last long due to how easy it was to see players through the cars.

It was not uncommon for me to camp for long periods of time later on, and then end up running halfway around the house to try to prepare a move, be it a surprise or ambush. It was the best chance everyone had to make hits, along with ensuring that their teammate knows what to do. At one point, the opposing team was on the deck, maintaining control of the area and holding back my teammate. I managed to be able to use this opportunity to sprint all the way around the house to the right side of the deck and eliminate both players before they could react, although I almost misssed due to the short range of the 4100’s drilled-out riot blast I used.

Overall, it was an interesting game that required adaptivity to the unique terrain as well as finding and taking advantages of weaknesses in opponents’ thinking.